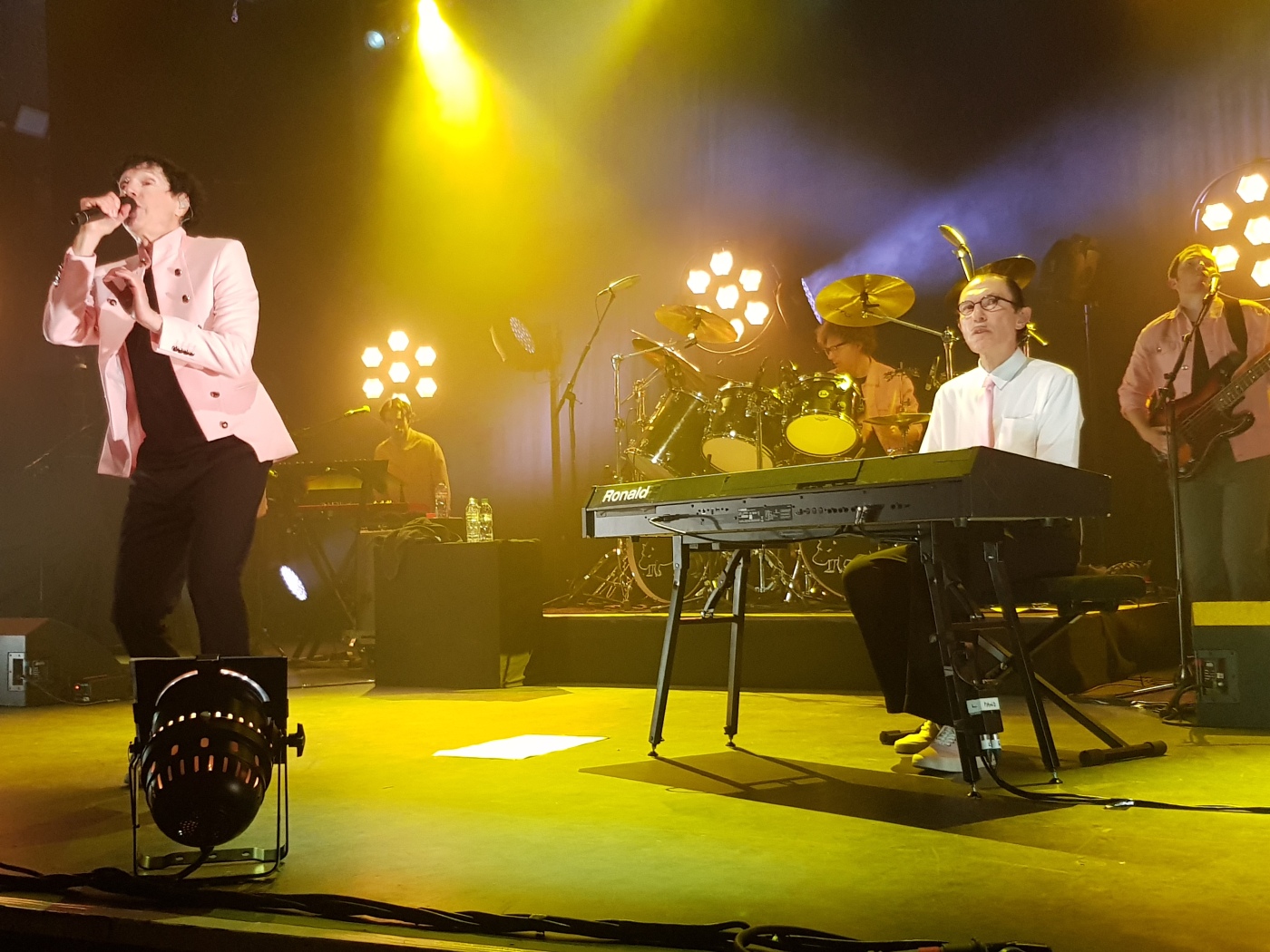 Art-pop band Sparks, consisting of brothers Ron and Russell Mael, have been renowned throughout their career to not shy away from the more obscure topics and subject matters in their music. Their approach to acerbic lyrics has recently resulted in a plethora of songs that use religious imagery in a number of striking ways.

This is not to say that lyrics pertaining to religious themes is a new occurrence in Sparks’ discography. One of their most renowned singles, The Number One Song in Heaven (1979), revolves around a song “written, of course, by the mightiest hand.” While belief in a deity was mocked in 1976’s Everybody’s Stupid (“Now I got some music and the Lord / And I’m feeling dumber than before”).

More recently, the latest Sparks album, Hippopotamus (2017), was promoted by the single, What the Hell is it This Time?. An ode to an angry and overworked god’s frustration with the mundane, the song continuously flips from the requests of adherents:

“My god is great, my god is good,
He loves every man,
But show consideration when you pray in demands,
His plate is filled with famine and with clean wholesome air,
If Arsenal wins, he really don’t care”

Sparks – What the Hell is it This Time?

To the frustration of god:

Sparks – What the Hell is it This Time?

The song acts as a wry take on mundane concerns, poking subtle fun at the self-absorbed through a creative take on prayers. Similarly, the use of religious ideas to tell ‘human’ stories is also adopted in their 2006 song, As I Sit Down to Play the Organ at the Notre Dame Cathedral. Concerning a high-achieving organist, Notre Dame illustrates his/her feeling of unfulfillment – they have achieved the prestigious role of Notre Dame organist, yet the congregation is more concerned with worshipping god than appreciating their musical skill:

The song ends with a (presumably agnostic/atheist) visitor to the cathedral attempting to “escape the rain”, who appreciates the musician’s abilities and kindles a relationship with the organist:

Beyond these examples, Sparks’ 2009 radio musical, The Seduction of Ingmar Bergman (which tells a Kafkaesque tale of the acclaimed director’s temptation by the Hollywood elite), features a segment in which Bergman questions god’s existence (“Oh my God”). The piece, which is based a year before the release of Bergman’s seminal The Seventh Seal, anticipates many of the themes that would later feature in his work – notably death and existentialism.

These songs serve as interesting examples of religion in pop music due to their thematic nature: they never truly address religion ‘head on’, rather religious themes are used to drive the lyrical narrative. When one thinks of examples of religion in popular music, they may think of songs directly critiquing religion (e.g. Genesis’ condemnation of televangelists in Jesus He Knows Me, or Green Day’s overview of American Christianity in East Jesus Nowhere), or alternatively songs exploring questions surrounding faith and reason (Bad Religion’s Shattered Faith). These examples from Sparks, however, use religious ideas and themes to tell a story. Pop music is often deemed to be for the individual’s interpretation – that the ‘meaning’ of a song is what the listener makes of it. Ultimately, or at least to myself, Sparks’ music concerns people, in particular their relationships, emotions, and activities, which is achieved through unconventional subject matters and ‘off-kilter’ lyrics. What the Hell is it This Time? is about the lives of ordinary people and their concerns/egos, Notre Dame is about love, relationships, and one-night stands, and even Ingmar Bergman’s existential crisis tells more about his desire to escape Hollywood than his faith in god. All of these pieces are drawn together by the use of religion as a way of conveying the narrative. They are not necessarily about religion, but make use of religion.